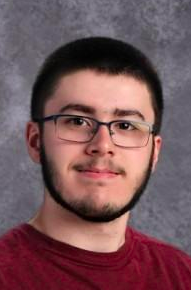 Mr. DeMillo would like to recognize Owen Therriault. If I were to give an award for perseverance and growth in 4 years of high school, Owen would be my number one candidate. Owen came into my advisee just a little less than half way through his Junior year. Over the last year Owen and I had several conversations about what he plans to do after high school, why he now appreciates education, how much extra learning he does outside of class, and to top it off he works the maximum amount of hours he is allowed to work by law in the state of Maine. Owen has turned into a mature, hard working young man, who now apologizes every day for being slightly late after the first bell. I cannot wait to see what he accomplishes after high school.