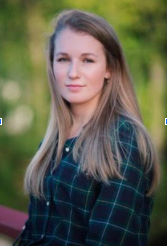 Mr. Gower would like to recognize Nina Gyorgy. Nina has brought a level of intellectual curiosity to the classroom that she has pursued outside the school walls through Model UN and the National History Day competition. She enjoys analyzing an argument and excels in articulating her own claims and opinions in a way that suggests maturity beyond her years. She was awarded at the Model UN Conference in Boston for her achievements, and won the State NHD competition in the Exhibit category which allowed her to represent Maine in the National competition in Washington, DC last June. She has continued her passion for Social Studies this year as one of the founding members of the Rho Kappa National Social Studies Honor Society at Maranacook. Nina is thoughtful, curious, introspective, and compassionate. Its been a great pleasure to be her teacher. I look forward to seeing what she accomplishes in the future!