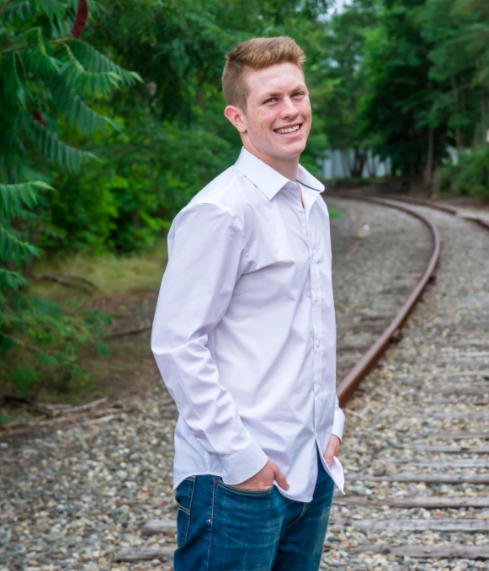 Mr. Magnusson would like to recognize Skyler Boucher. Skyler has been my advisee for the last four years and was named captain of the basketball team this year. Skyler has matured a lot over the last four years and I’ve really enjoyed getting to know him. He has great interpersonal skills and can start up a conversation with anyone. Though I enjoyed coaching him, I enjoyed seeing him outside of the games and practices as well. He became an important member of the “Magnusson Family” as his interactions with my boys made him like a big brother to them. He also took pride in working with the youth in the community. Skyler was one of the best leaders I have had the pleasure of coaching in basketball.  He cared about his teammates more than himself. He looked out for them and tried to help them achieve their highest potential.  He was extremely coachable and would do anything for our program. His best traits are his toughness, work ethic, positive attitude, and ability to connect with people. He led our team to become the KVAC Conference Champions and the Class B State Runners Up.  Skyler is going to Central Maine Community College and plans on going into plumbing.  Skyler will excel at the next chapter of his life and have a GREAT impact on many lives. I’m proud of you Skyler and look forward to following you after high school.

Mr. Stockford would also like to recognize Skyler Boucher. Skyler has grown into a polite, responsible and empathic student. Skyler was an IA student as a Freshman and Sophomore. He studied Plumbing and Heating at CATC his Junior and Senior years. As a Senior Skyler took both; Engineering Drawing and Design and Architecture to increase his knowledge in the building trades. CAD and the CNC became a focused study for him. Most of his study halls and a lot of after school hours were spent in the IA shop working with CNC. Beside academics Skyler is an athlete, he played football and basketball.