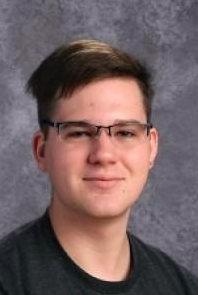 Mr. D. would like to recognize his advisee, Talyn Plummer. Talyn came to Maranacook shortly after the start of his junior year and in the short time since then he has become much more involved and comfortable at MCS. Talyn's passions are gaming and cooking. In his first year at Maranacook, Talyn was instrumental in helping to get an after-school gaming club started. The club has provided a great gathering spot for many of Talyn's peers who enjoy gaming as much as he does. Talyn has also blossomed as a chef. Talyn attended the Culinary Arts program at CATC this year and he loves to cook. When our group gets together for an advisee activity, Talyn usually finds a way to treat us. He is a particularly good baker and the Chocolate Cinnamon rolls he served up this past fall on our advisee day out were a huge hit! I hope to see Talyn continue to pursue his passions after he graduates from MCHS!  Ms. Gross echoes Mr. D’s highlights about Talyn.  Although I have only known Talyn for a short time, it is clear how much he enjoys his cooking experiences through CATC.  He was always eager to tell me about the cooking adventure of the day.  I wish Talyn the best in his future endeavors.