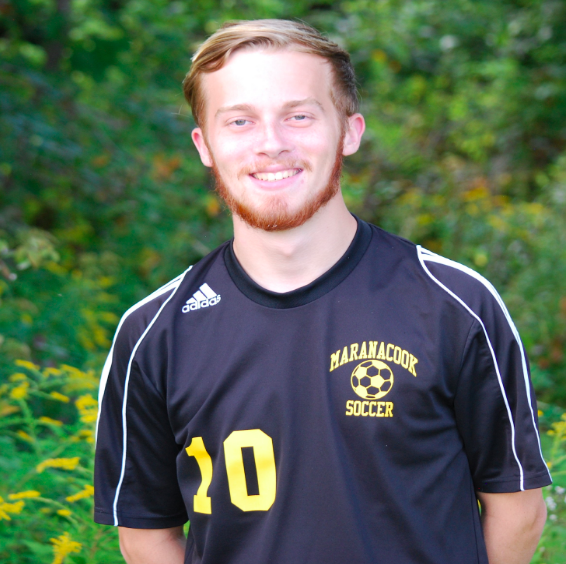 Mr Magnusson would like to recognize Jack Galletta. When you get to know Jack you see he has one of the best personalities at Maranacook. Few people got me to laugh in my head or out loud as much as Jack did over the last few years.  He is extremely funny and witty. Jack is a great friend to many and easily fits in with everyone.  When asked to do something he will always be there and try it.  Being a part of a team was very important to Jack.  This year Jack was a leader on the Soccer team that went to the regional finals. Jack had a great season. During the last 4 years Jack also was involved in Tennis, Lacrosse, and Alpine Skiing. No matter what sport he played he was a good teammate and he always worked hard to be better the next season.  Jack also joined more clubs the last two years to be involved a variety of things.  Jack has taken a lot of pride in being a part of Maranacook. When he finds things he is passionate about he excels. This will help make Jack have a bright future, but one thing I like about Jack is he also enjoys his present. Good luck in the future. We will miss you.

Mr. Gower would also like to recognize Jack Galletta. If they gave out awards for most like my own personality when I was that age, Jack might be the winner (and who wouldn’t want that award??). I’d like to echo everything Mr. Magnusson said above about his wit and his ability to connect well with others. His calm approach and laid back demeanor can be a comfort to others in difficult moments. If I ever was in a situation where there was a runaway trolley barreling toward people on a track and I had to make a stressful and split-second decision, I would feel much better if Jack was there too (sort of an inside joke). “The language of excitement is at best picturesque merely. You must be calm before you can utter oracles.”- Henry David Thoreau.

Best wishes and good luck in the future!