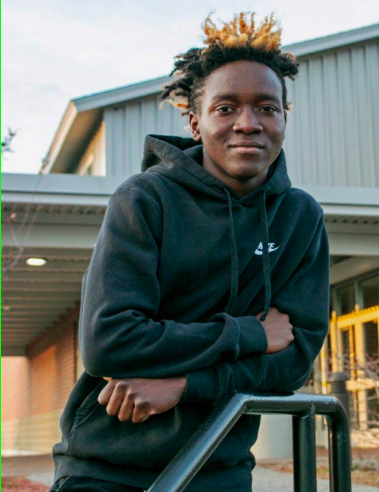 Mr Magnusson would like to recognize Rojay Richards. Rojay was a great addition to Maranacook and to our advisee group. Rojay is very funny and easy going.  He has a great attitude no matter what we were doing. He would join a game, a conversation, or an athletic game. It didn’t matter he was always in the center of it. Even though he has a lot of responsibilities at home watching his siblings he found time to excel at many things at Maranacook. He was in the musical for the last two years and brought a lot of energy to the performance. He was one of the best soccer players on the team this season. His work ethic and skill made him fun to watch. He will further his education at Farmington next year and will join the Soccer team as well after being recruited. Best of luck in the future.

Mrs. Libby: I love seeing Rojay enter the classroom in the morning. He is so polite and respectful of elders, and he is both playfully and quietly friendly in his greetings. He is willing to engage in whatever activities and conversations are happening, but is also good at sitting back and observing how things are going -- an important skill to have!  While Rojay is known for his abilities in sports (as he should be), he also isn't afraid to try something new.  He not only helped create the fabulous senior dance for Winter Carnival, he also joined the theater crew to put on Mamma Mia, and his performance was marvelous!  It shows he is willing to extend his knowledge, test his skills, and open his life to new and creative adventures.  We wish you all the best, Rojay!