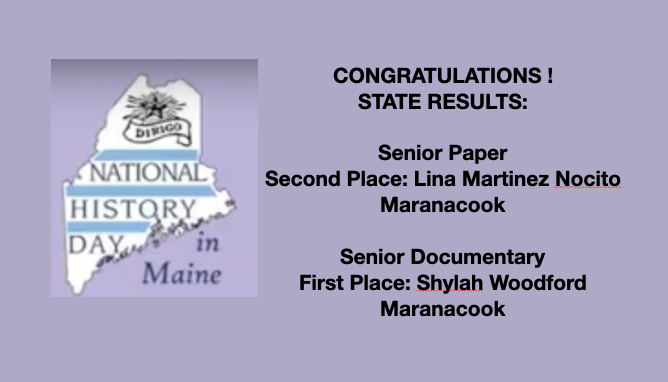 Three Maranacook students advanced to the State of Maine’s National History Day (NHD) Contest. Ruby Nelson competed with her paper titled “Can I Enlighten or Awaken You?”; Lina Martinez-Nocito competed with her paper titled “I Ask No Favors For My Sex: Sarah Moore Grimké, Abolition, and the ‘Woman Question’”; and Shylah Woodford competed with her documentary titled “After The Gavel Struck”. Lina Martinez-Nocito was awarded 2nd place in the State Contest. She will receive a medal and a certificate. Shylah Woodford was awarded 1st place. She will also receive a medal and a certificate. Additionally, Shylah was awarded the Margaret Chase Smith Women’s History Award which includes a cash award and a Margaret Chase Smith Bobblehead. You can see all of the contest participants and results here: https://sites.google.com/maine.edu/2022nhdinmainestatecontest/categories

Both Shylah and Lina are invited to compete in the National History Day contest in June competing against the top finishers from each of the other States in each of the contest categories. Congratulations to all the Maranacook students who completed National History Day projects this year and a special congratulations to Ruby, Lina and Shylah, who put in a lot of extra time and effort to show the importance of Social Studies in our lives!